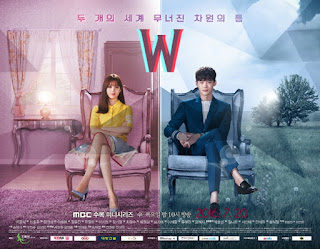 I stumbled across this drama while viewing the free session on my local cable TV. It was Episode 3 and it caught my attention, so I went online to search for it. It was a new drama and I was instantly hooked! This is the first drama where I literally "chased"... Yes, I stayed up to watch the livestream on Youtube. I was that crazy! :D It was really fun waiting for the livestream, reading the chats and being a part of a global live audience! But the drawback was there were no subs since it's livestream so I didn't understand a single word. :( On average, the viewer count was around 4k. For the last episode it went up to 10k! Daebak!!

Sorry it's taken me this long to write the review. :) I needed some time to recover from this drama and I was also busy doing other reviews too. ;D Let's jump right into it now, shall we?!

As with the drama title, it is a story of two worlds, both existing and running concurrently. The real world and the world of manhwa (comic book world).

Kang Chul is the lead character in the comic book entitled, W. The author is Oh Seong Moo. W is the no.1 comic/ webtoon in Korea for many years. Kang Chul's story starts as him being the Olympic champion in the mens shooting singles. Not long after that, his family was mysteriously murdered. All of them were shot at point blank range, leading the prime suspect to be Kang Chul as no one else has that ability to shoot so well. Kang Chul was arrested, accused of murder and thrown in jail. However, he was acquitted later for insufficient evidence.

Kang Chul wanted to end his life after that, as he found no hope in continuing his life since his whole family was gone. He went to the bridge and jumped off it into the Hahn river to commit suicide. It was that very moment when he jumped that he realised he wanted to live and then he clung onto the railing. He wanted to find the killer of his family.

Meanwhile, in the real world, the W author, Oh Seong Moo is a struggling artist. His drinking habit and lack of success in his career takes a toll on his marriage. His wife filed for divorce and the custody of their daughter.

It was that very night when his family left, he was drinking and decided to end the W comic. He drew Kang Chul committing suicide and drowning in the Hahn river. However, the next morning he awoke to find Kang Chul still hanging onto the railing.

Shocked and thinking that he was drunk drawing (Haha, I created a new term!) He distinctly remembered drawing Kang Chul dying in the water. But seeing that he didn't die, Mr Oh decided to save him.

With that, W comic soared to success and Mr Oh's career took off. However, he was still struggling with his drinking addiction and he noticed that his creation, Kang Chul seem to have a life of his own. Each time he draws something, it will change by itself. He thought he was going crazy. Little did he know that Kang Chul indeed was alive and writing his own story.

Mr Oh realised that he had no control over Kang Chul anymore so he decides to kill his character. He was afraid that his creation will one day come to kill him. (What?!) Mr Oh tries to kill Kang Chul through his many drawings.

Mr Oh's daughter, Oh Yeon Joo is now all grown up. She is a trainee heart surgeon, struggling to keep her job as her superior Professor Park thinks that she is incapable to do anything at all. However, she is saved as her father is the famous author of W, which Prof Park is a huge fan of.

One day, her father's assistant called to inform that her father was missing. She heads over to her father's studio to have a look. The next thing she knew was that she was in the W comic world and finds herself meeting Kang Chul. He was injured and lying in a pool of blood and she saves him.

The story goes on with Oh Yeon Joo going in and out of the comic world because of Kang Chul's strong questioning of his existence. He will eventually find out the truth and the two worlds will collide. 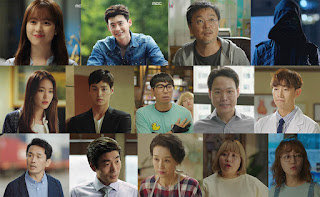 The first half of the series was so thrilling. Each episode will keep you on the edge, guessing what's going to happen next. But when it reached midway, the plot just went haywire and all over the place. If you are familiar with football, you would have heard of the Brazilian samba. The story was exactly like that going here and there...

Best parts of the drama?

Definitely a lot of cool features in this fantasy thriller drama. Firstly, Kang Chul's penthouse... You will love the interior. :D 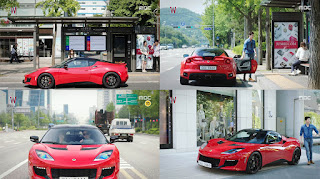 The comic graphics and transition between the real and W worlds: 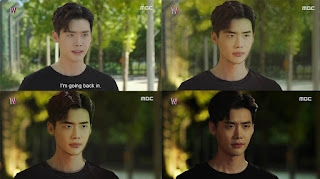 The meeting between creator and creation. Mr Oh and Kang Chul's showdown:

Funny moment with Professor Park a.k.a. Crazy dog at the cafe:

Scary moment with the no-face killer and then he had a face (Because he stole it!) 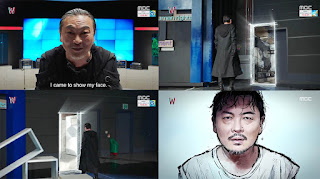 Kang Chul is a multi-millionaire so he dresses really well of course. ;) Anything he wears he turns it into a model fashion. Even chequered or traffic light suits... :P 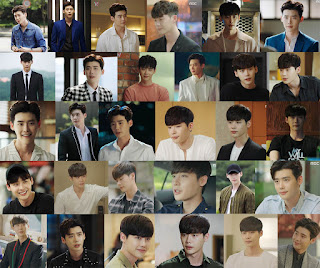 To be honest, the story was all over the place by the time it reached the end your mind is a total mess of events. :D There are two endings, one for the W comic and one for the real world.

In the comic W, the readers see Kang Chul dying at the bus stop after being shot by the bad politician. It seems like justice was not done to that bad guy or any happy ending at all for Kang Chul. But the readers accepted the ending as a sad but believable ending. (Wtf?!) 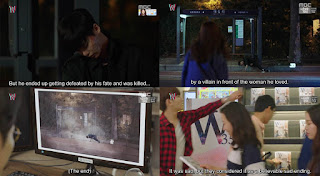 In reality, both worlds continue to co-exist. The W world shows Kang Chul actually didn't die. He was saved by his best friend bodyguard and went to jail for two years. I'm not clear why he went to jail, was it because he broke out of jail or that he killed the no-face killer guy in the car collision shoot-out part. The story only shows that Kang Chul was cleared from the uncle's murder. I'm also not sure if he was cleared of his family's murder but I think it was when the no-face killer shot everyone at the studio, the killer admitted it I think. ?!

Kang Chul returns to the real world after that two years but it has only been a week in the real world. Oh Yeon Joo thought he was dead and was so heartbroken. She kept going to the bus stop where she last saw him and fainted out of exhaustion (or heart brokenness?) It has a happy ending when she woke up to find Kang Chul next to her. 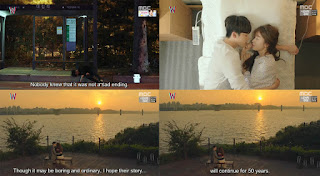 Mr Oh never returned to the real world. He decided to end his life in exchange for Kang Chul's freedom. It was a really sad ending imo, that the father gave his all for his daughter's happiness.

As I was doing this review, I read up some new comments. Apparently there will be a season 2 of W. My initial reaction was WHAT??!! I'm not really looking forward to it. I just feel there are too many loopholes and if there is really a season 2, I hope that the writer will do a less Brazilian samba plot. :D

I guess there's only one reaction that describes this entire drama. That is Prof Park's reaction... and yes, I totally agree with him! ;P